The inherent dishonesty of Brexit shouters

When you have a habit of trawling the #brexit hashtag on Twitter you invariably come across a number of very dubious claims about the supposedly ‘dwindling’ size of the EU economy juxtaposed with the amazing economic prowess of the UK economy.We’re the fastest growing G7 economy is one dodgy claim. Why shackle yourself to a corpse is a favourite Dan Hannan Line, exposed as an ordinary liar in another blog post.

Today I have it in for a Kipper female called Beverly Dunlop. I am not sure if she is devious like Hannan or just plain dumb. Her profile picture would suggest the latter, but that is no excuse for tweeting and retweeting lies about the EU just because you have this unquestionable belief the UK would be better off outside.  To understand the dishonesty I am blogging about, please consider two of her recent tweets side by side.

Now when grown-ups discuss relative size of economies we generally talk about Gross Domestic Product (GDP), but note there is not just one GDP people mention, there are in effect four different relevant measures:

Eurosceptics are known to trawl through all four measures until they find the UK or EU ranking that best would seem to underpin their dubious #brexit claims. I am sure that one or two so called Europhiles in the remain camp have done the same. In psychology this is referred to as selective perception.

It’s when kippers within one discussion thread use a figure from table 3 to show how bad the EU is supposedly doing, while almost in the same breath to prove the UK’s brilliant economic performance they selectively switch to table 1, things turn to outright deceit.

When I asked Beverly what source she was using, PPP or nominal, she dismissed my query with: “Do your own research” so I did.

Bev’s first claim, the EU represents only 17% of Global GDP could be explained away by selective perception. If you use table 3 you get the EU’s $18.6 trillion divided by the world’s $108.7 trillion you indeed get a 17% global share. In the same vein, dividing UK’s $2.6 trillion GDP in the same way you arrive at a paltry 2%. So much for being fifth in the economic league tables. You are in fact dwarfed by the top 3 global players.

Keep in mind for a moment this fifth place Bev attributes to her beloved ‘Great Britain’.
If I use the same PPP figures Bev just used to slag the EU Economy, I find the UK ranked 10th, not fifth! The EU ranks 1st in Both Nominal and PPP tables; no need for us to cheat by comparing apples and pears. So this is where the propaganda deceit of the #brexit camp really kicks in. It turns selective perception into an art form.

To be perfectly honest, if you are comparing how well citizens are profiting from all this economic nationalistic drum banging, table four above is the only correct table to use. Funnily enough the UK finds itself at a modest 27th position on that list with nine countries using the Euro in fact outperforming ‘Great Britan’. Of course you will not hear a tweet about that uncomfortable fact. You’re meant to just pity those poor Greeks, not envy richer Benelux dwellers an hour’s drive away from Calais.

Only when discussing UK’s exports before or after brexit it makes sense to use nominal GDP values as an indicator of how big a market a foreign trade bloc or country might represent. After all, the UK’s exports will be paid in real dollars, not hamburger dollars. Unfortunately for kippers, the EU tops both lists here. Not their beloved Commonwealth, not their special friends the USA.

I’d like to hear in your comments, am I too harsh on poor Bev? Is she simply dumbly retweeting Hannan, who is a known deceitful prick or is Bev devious as well? Actually looking at her profile pic she looks kinda dumb. 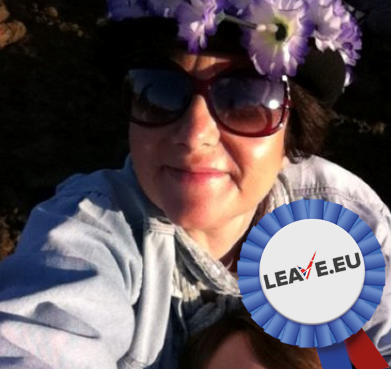 But looking at her tweets she is probably both dumb and devious, a dangerous combination. 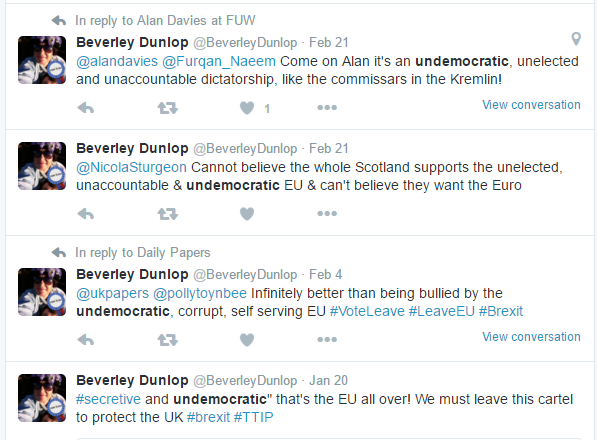 You see she goes on and on about the EU commission being unelected but ignores the fact that MEPs are and also the council of ministers are all elected politicians. As if SIR Humphrey in Westminster, the one who prepares laws for UK Prime Ministers, is elected rather than appointed.

Passionate about Identity Management Disgusted at #ukip and #brexit
View all posts by lasancmt →
This entry was posted in #brexit, EU, EURO, UKIP and tagged #brexit, #brexit #euro, eureferendum, UKIP. Bookmark the permalink.

1 Response to The inherent dishonesty of Brexit shouters